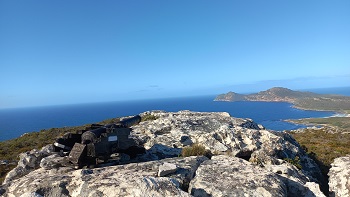 I can seldom resist the opportunity to hike anywhere in Cape Point Nature Reserve. Being on this narrow strip of land on the far southwestern corner of southern Africa holds an incomparable magic for me, as I experience a sense of being far from any trappings of ‘civilisation’ and in tune with raw nature. Today was, for all of us I think, one of the most exciting hikes we have been on in terms of wildlife viewing.

Barely five minutes into the trail, I was photographing the fantastically contorted cedar trees when through the branches I noticed a large raptor being harassed by a pair of Egyptian geese. As it flew closer, thoughts of Booted Eagle then Gymnogene flitted through my mind, but it was too big and not the right colour. Its huge wingspan allowed it to glide effortlessly into the top of a nearby tree, where it folded its wings and glared out onto the scene before it, apparently dissatisfied with where it found itself. And quite rightly. It was a critically endangered White-backed Vulture. Not your usual bird sighting anywhere much south of the upper regions of South Africa. I could barely contain my excitement as I punched the name into the rare bird alert group to let the interested twitchers in on this incredible moment, and within minutes my son was on his way to Cape Point with a real camera to capture the moment.

In the meantime, our hike continued. We stopped to admire the biggest Golden Orb spiderweb any of us have ever seen, shimmering in the early sunlight and a marvel of nature, spun by a proud spider clinging to its web awaiting its first meal. Nearby, a few healthy looking baboons were sitting in the shrubbery, and it wasn’t long before we found ourselves in the midst of a troop of around 30 of all ages and sizes. They were heading along the same trail as us, and it was quite amusing to be traipsing among the troop, youngsters squealing and screeching, mothers keeping a close eye on them and the big Alpha male looming extremely large nearby. They eventually peeled off, leaving copious amounts of poop which I stepped in, the sun being in my eyes and all!

As if this wasn’t enough excitement already, as a sparkling blue False Bay came into view, two whales breached and splashed back into the water, causing a massive sheet of spray as if a mine had detonated, and soon we were seeing splashes all over the coastline as the Southern Right whales signalled their return for the winter. Many stops were made as we ascended to the ridge – whale watching is a favourite activity for many and this has to be one of the better places to do it.

The sky was a brilliant blue, the breeze gentle and cool. Sugarbirds and orange-breasted sunbirds posed on proteas and chased each other at great speed in a joyous celebration of life. The winter fynbos was starting to bloom and splashes of yellow leucadendron outshone the slightly more sober greys and whites of the lesser species. In the distance we could see an eland browsing on the lawns above Buffels Bay, and ostriches grazed quietly under the trees. The baboons were doubtless down on the rocks, picking seafood morsels from the rocks, and overhead the resident Jackal Buzzard gave us a wonderful view of his striking wing patterns. All was well with this little part of the world.

A coffee break on Kanonkop, where the remains of a British cannon placed there in 1806 to alert the citizens of passing ships will surely rest forever, allowed us to soak up the warm winter sunshine while enjoying expansive views of both Cape Point lighthouses and across to Cape Hangklip guarding the entrance to False Bay. It was wisely decided to retrace our steps to maximise the viewing opportunities from a better vantage point, and the 7.5 km trail was finally completed after a good four and a bit hours of fabulous weather, wildlife and whales!

A leafy trail for all 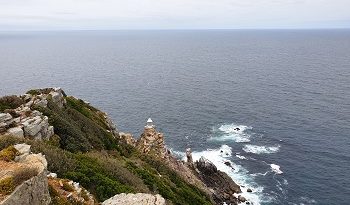