At the end of November, I was bemoaning the disappearance of the garden birds. It seems they were very busy on their nests elsewhere, as they have returned with a vengeance! All are youngsters – the malachite sunbirds still growing their tails and in juvenile plumage, with a hint of the striking colours that give them their name; Southern Double-collared sunbirds, tame as ever and letting me approach closely to admire the splash of red appearing on the breast; weavers fighting over the suet ball, wings fluttering as they shout for food from watchful parents. Cape White-eyes are reappearing, although not in the numbers we used to see when the coprosma had their favourite sticky orange berries – that tree succumbed to the drought a few years back and all of the remaining trees are male and do not bear berries. (It was always a source of irritation that the only female tree dropped its berries on the bricks rather than in the garden. The seeds have dispersed all over and new plants grow everywhere, so hopefully one will turn out to be female.)

The most noticeable thing about this new generation of birds – and there must be around 20 of them – is how playful they are. They chase each other in loops and whirls, rising and falling like tiny stunt planes at unbelievable speed, then abruptly alighting on a twig, only to resume the chase seconds later. The freedom of those wings is an absolute joy for them, and for me to watch. Things get even better when I turn the hose up into the air and sprinkle the tree tops – they love nothing better than a quick bath and feather fluff.

My favourite residents are the Southern boubou family – currently Mom, Dad and Junior – who arrive at daybreak and leave at sunset and chatter in the shrubbery all day. Junior has still got short wings and is learning what to eat. Yesterday he spent some time pecking at a peach, although I am sure a juicy worm would have been more to his liking. I have plenty of those. We rejuvenated the vegetable patch under the watchful eyes of the little family, parents keeping a close eye on their pride and joy and calling in their distinctive way, with Junior chatting away in a series of chirps and twitters, rather like a parrot. Most interesting to listen to the interaction and such a privilege that they have chosen my garden to bring up their young year after year.

Where have all the birds gone? 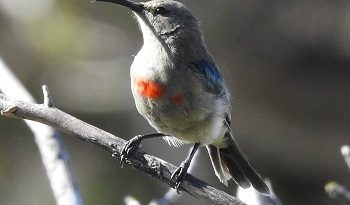