The wreck of the Kakapo, whose captain took a wrong turn on its maiden voyage while delivering the vessel to Sydney, has lain stranded on the white sands of Noordhoek beach since May 1900. Having mistaken Chapman’s Peak for Cape Point in one of the Cape’s notorious winter storms, the ship ran hard aground. The crew jumped overboard and walked up the beach, but the hapless captain remained aboard for some three years, it is said, before being removed to an asylum. The shifting sands cover and uncover the skeletal remains and they are currently surrounded by large dunes which have trapped the outflow from nearby Wildevoelvlei and the waters from spring high tides, creating a large lake between the wreck and the bush at the back of the beach. As a notorious hotspot for muggings, this water hazard has created what is hopefully a deterrent to those bent on misdeed!

A fog bank loomed on the horizon as we set off from the Kom to follow the shoreline around the village and along Long Beach. It wasn’t long before we were enveloped in the fog as it stretched long fingers over the land, suddenly dissipating and leaving us in the sunshine, then swirling around us in an instant. Soon we were spectral figures straggling along the beach, barely able to identify each other, with a watery light oozing through the fog reflecting off the heavy shore break. Sunny spots allowed us a view of the crystal clear but icy sea, the white foam speeding up the beach and threatening to wash over our feet but receding at the last moment. Strong currents have scoured the beach into a series of crescent-shaped inlets, and the usually gentle slope has steepened to form a bank. The sands were pristine, devoid of the usual jetsam coming from passing ships and careless beachgoers and even the kelp was minimal. A sunny patch revealed a fogbow – a white rainbow that reflected its arch off the mist – always an exciting moment to see nature at work!

The white sands of Long Beach are the finest grained I have ever seen, soft and silky to the touch of bare feet, and hard going unless you are following the waterline. The latter was favoured and wet shoes were the order of the day, but the sea was surprisingly warm (around 10 degrees maybe!) and nobody complained. How could they on such a perfect morning. meandering through the mist?

The walk from the Kom to the Kakapo is roughly 9km and is perfect for a group of not-so-young young-at-hearts! 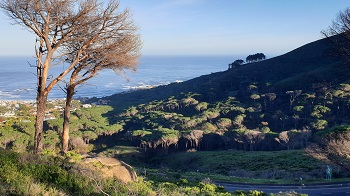 In the shadow of Table Mountain

A promenade along the beachfront