Sunday was one of those rare Cape Town days when the weather was practically perfect in every way (just like Mary Poppins). A gentle westerly cooled the sun’s heat as it shone down on us from a cloudless cerulean sky and the sea swelled glassy in small undulations. Boats bobbed cork-like as keen crayfishers threw nets for red gold on one of the few legally allowed fishing days, and the rocks were lined by expert fishermen using bamboo rods and lines heavy with bait to lure them from hiding places close to shore. Their skill was apparent as they hauled crayfish after crayfish from the shallows and dropped them into the waiting bag. Certainly less outlay than a skiboat! Here and there a flipper glinted as a diver came up for breath before diving down into the depths in search of a telltale feeler protruding from a rock – this is possibly the hardest way to get your quota and requires a wetsuit for the icy Atlantic and a fair amount of fitness.

All of this was happening down at the base of the Cape of Good Hope in the Cape Point Nature Reserve, usually crammed with tourist buses but now blissfully empty but for locals. Bad for the tourism industry but no doubt the way every tourist attraction in the world is viewed by its local people. (The lighthouse is situated on Diaz Point, not the Cape of Good Hope as is generally thought.) Many years ago, a party of friends dived about 20 abalone in the bay and had spread them out at the side of the road while they warmed up in the sun after a long, cold dive. A busload of Japanese tourists drove by and their eyes were on stalks as they saw the casual availability of such a delicacy.

We were neither crayfishing nor traipsing up the steep hill to the lighthouse. We were taking a very slow drive through the reserve where we usually hike purposefully for exercise, and now were stopping to smell the fynbos and look at the birds and buck! There is no other way to fully appreciate nature than to stop the car, get out and wander a little way into the veld to see what is there. We car hopped from bay to bay, watching hundreds of Swift and Sandwich terns wheeling and landing, only to be disturbed and taking flight again in spectacular displays of synchronised skill. Skeins of cormorants strung out to sea in both directions, always a busy bunch of birds, and a lone bird caught and swallowed an impossibly large fish right before us. Cape fur seals basked on a rocky ledge battered by a rising tide, and some very young seals struggled to regain the land as they swept in and out with the surge – at least it looked like it to us, but no doubt seals are very well equipped to handle all sea conditions and they soon joined the adults after their adventure.

The time passed by unnoticed as we watched lizards lounging, a molesnake slithering, birds perching and flowers blooming. No looking at the clock, no wi-fi connection. Just the sunshine, a breeze and a herd of bontebok for company. Carpe diem. 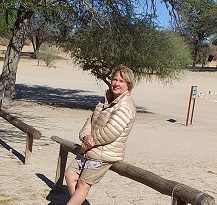 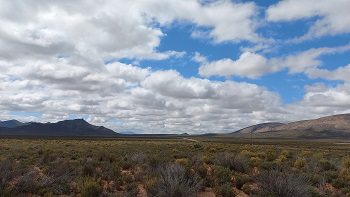 Off the beaten track 3